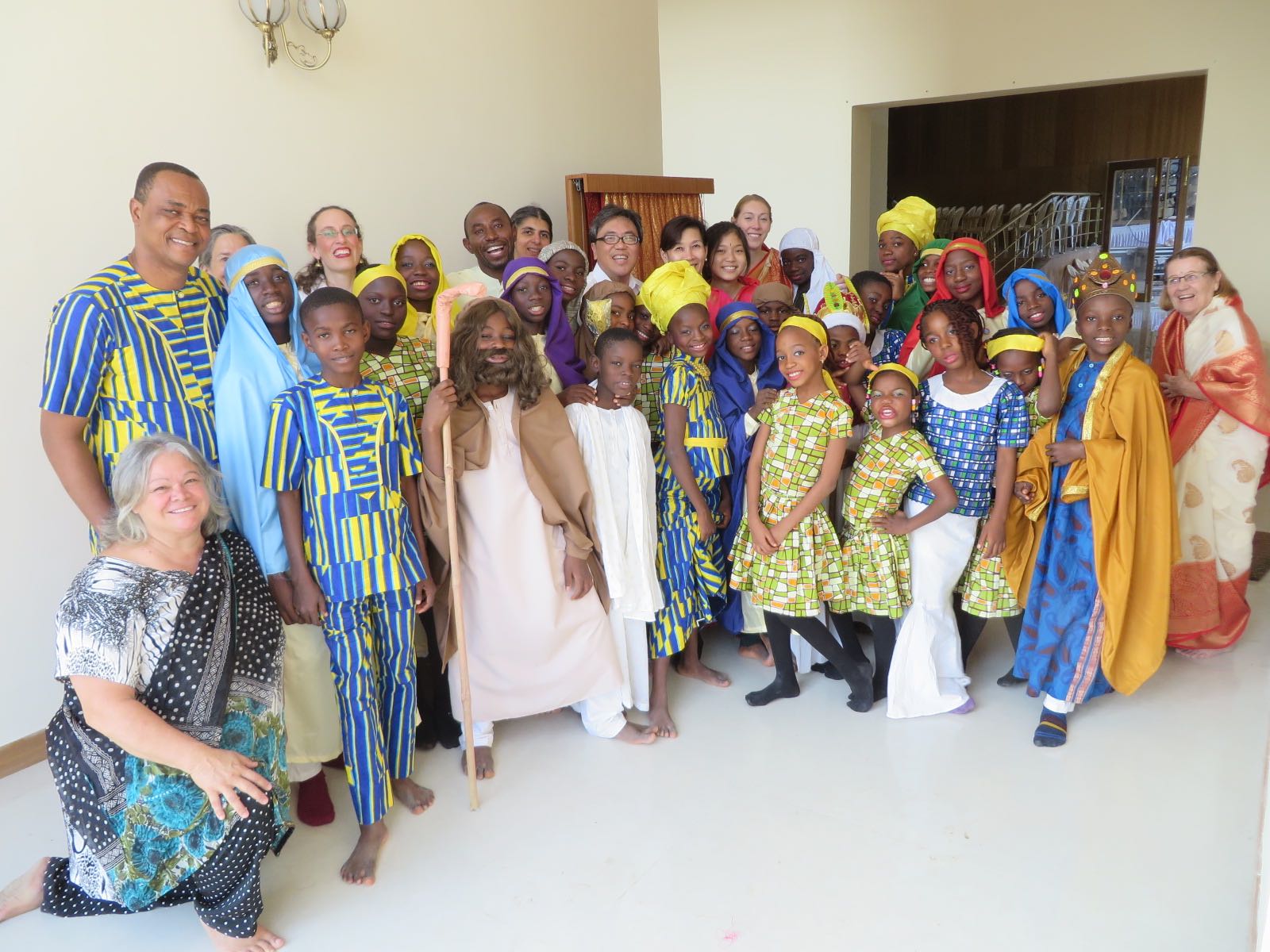 I write to you today from Puttaparthi, a small cosmopolitan ashram town about 3 hours from Bangalore in the Southern part of India. It is a balmy 33 degrees and the usual sounds of construction, honking horns, birds chirping, monkeys jumping, and people talking surround me. I arrived here a few days ago after an incredible, life changing few weeks in another small town where I spent Christmas with a very dear mentor, Father Charles Ogada from Nigeria. He came to India with 25 of the children from his school, The Embodiments of Love Academy, and was joined in India by myself and several other volunteers from around the world. We met together to perform in the ashram as a choir (I played the flute) and for the children to perform a Christmas play called “He Lives In You”.

For all of these children (ages 7-14) it was their first time leaving Nigeria. For some it was their first time even going in an elevator! For me it was the first time I ever had to perform on the flute without music in front of me (ie improvise). For some of you this might not sound like a big deal but for a classically trained flautist (which I am), this struck terror in my heart. Even with music, my experience of performing has been one of anxiety in which I feel my heart pounding and hands trembling. This Christmas, not only was I being asked to perform in front of a couple thousand people (which would have been nerve wracking enough), but I was being asked to perform with two musical geniuses (this is not an exaggeration! Check out their websites: Jude Nnam and Dimitris Lambrianos) without any music to guide me!

The two musicians I was playing with are both professional musicians, virtuosos and well known composers and who have been performing from the time they were toddlers. Every time we sat down to play together they would change the key or try out new variations on the theme and each change they made would sound magnificent and perfectly in harmony with the choir and each other. It was magical to listen to but I couldn’t possibly keep up. How, I wondered, could they create such beauty with such ease and levity? I did my best to try to learn the basic melodies and to follow along but I was nowhere near their level of skill. The situation was even more challenging than this, however.

When we were not rehearsing, I was charged with doctor duties as well as helping to manage the activities and behavior of the 25 children (whether they were playing, eating, walking, or going to bed). And, while these children are unbelievably sweet (the older children Hand Washed All the clothes for the younger children the entire time!!!), they are also quite naughty and the behavioural standards in an ashram setting are more rigorous than in most places so this was a formidable task. In addition, I was sharing a room with and looking after the 6 youngest children 3 of whom were sick with wracking coughs all night long. I was their temporary mother: putting them to bed, waking them in the morning, ensuring they were bathed, dressed and clean, and ensuring the room was cleaned. On top of this, I had 3 bed wetters in my room which required me to wake several times per night to wake them and/or I would also be hand washing all the sheets.

The end result was that I barely slept the entire two weeks. This was ok and actually quite joyful overall but I had absolutely no time to practice my flute or learn the songs we were to perform. It felt like mission impossible.

At a certain point I could only surrender and say, dear God, if you are listening, I am asking you to play the flute for me as I can’t possibly prepare in the way I am accustomed to doing. (And ps. you have to send me some helpers with these kids!! Thankfully more help did arrive in the final days)

With a couple of rehearsal days yet to go, the music started to feel a little more comfortable although improvisation was still difficult. What was starting to become clear, was that the more I tried to think about what I was doing and worried about the outcome, the more “wrong notes” I played. When I let go of all thought and simply allowed the music to flow, it would come out beautifully. In fact, when things became more quiet inside, music simply emerged as if it itself knew what it was doing and I was simply there to listen and enjoy.

On the day of the performance, my body was physically exhausted and I had a splitting headache. It was so bad that I could not think at all and could but surrender further, simply showing up and hoping that something would come out. Perhaps it was because I couldn’t think, or perhaps it was because of all the love and support, but as we started to play, I found myself starting to merge into the music. By the end of the performance, not only was I playing well, I was actually ENJOYING performing for the first time ever in my life. It was a paradigm shift, a complete game changer. Suddenly, performing became a gift and an opportunity to share something uplifting with others. Little improvisational imperfections and wrong notes could be made right simply by flowing them into the next note with confidence and grace. And, for the first time ever, I played without a racing heart or sweaty palms because it wasn’t about “me” making a mistake and feeling embarrassed at all. It wasn’t even really “me” playing. Instead it was emerging from a place of inner quiet. I could see with such clarity the misconceptions I have carried my entire life and suddenly the world looked a little different.

So as we start a new year, I hope that each of you finds ways to release yourself from old mental patterns to further connect with the space of inner quiet where there is no right or wrong. The creative possibilities which lie there are tremendous when we let go of our thoughts about how good we are (or are not) and about how things should be or sound. May you also delight in the ways that this infinite creative potential wishes to express itself through you moment to moment, be it through music or art, cooking or decorating, speech or writing, humour or healing.